The History of George Jerome & Co.

George Jerome & Co. is the company that helped build a city. Founded in 1828, the civil engineering and surveying firm laid out many of the hollow log water lines and streets of pioneer Detroit as the city began to expand beyond the riverfront. The 173-year-old company has been deeply entrenched in Detroit's growth, supplying foundation layout surveys for the construction of the City-County Building in the 1950s and the Renaissance Center in the late 1970s.

George Jerome & Co. is considered the oldest continuously operating firm in Michigan, established in 1828 when Detroit's population was only *1,517 and the roads - called corduroy roads - were only a row of logs winding through the region. *Wolves still roamed parts of Wayne County when Edwin Jerome, a 23-year-old man with a gift for mathematics, arrived in Michigan Territory from Batavia, New York and began his surveying enterprise.

In 1827, Edwin left Tompkins County, New York with his brothers, his mother Betsy and his father Horace Jerome, a lawyer and businessman who decided to strike out for Michigan Territory to make his fortune in the lumber business. Edwin forged his own way in this wilderness region, applying his sharp mathematical skills to dissecting the territory into saleable parcels.

Michigan Territory was then a vast expanse of roughly surveyed land covering present-day Michigan, Wisconsin and parts of Minnesota. Earlier surveys had divided Michigan into massive counties and then into township sections, each covering a square mile. "Edwin and his company helped divide the sections into more saleable quarter sections of forty or eighty acres," said George G. Jerome, Sr., current president of the firm.

Edwin's office may have been housed on the second or third floor above Allmand Brothers Furniture, a store once located near the present-day NBD Building on Woodward Avenue. In the winter, Edwin taught school in the city of Detroit, but in warmer weather traveled into the wilderness of Michigan Territory, carefully measuring each plot of land. Edwin and his business companions once traveled to Wisconsin and surveyed township sections right in the middle of the Black Hawk War - an attempt by the Sauk chief and his band to reclaim their ancestral lands in northwestern Illinois and southwestern Wisconsin.

Edwin described his journey at a speech delivered before the Pioneer Society of Michigan. The surveying party traveled the "log superhighway" from Detroit to Ypsilanti. "The corduroy road ended in Ypsilanti and they had to forge their way across the state using old Indian trails," said George G. Jerome. The ancient trail, known as the Chicago Road in the nineteenth century, ran from the Detroit River to the south end of Lake Michigan. Traveling in their wagons around early Chicago and arriving in the western part of Michigan Territory during the 15-week war, Edwin and his surveying party spent a tense night huddled around the campfire with their loaded muskets. "Somebody heard a rustle in the bushes, took aim ... and shot a 200-pound wild pig," related George G. Jerome.

Edwin survived the wilderness of Michigan Territory but was run over by a horse and carriage on Woodward Avenue, spending his later years in a wheelchair. After his death in 1880, his son Franklin Harrison Jerome kept the flame of the firm alive from the 1860s through the turn of the century. The company continued to leave its mark on the growing city, with Franklin himself assisting in laying out Detroit's Grand Boulevard, according to a George Jerome & Co. brochure.

Moving through layers of the city's history, the family and firm have occupied various buildings and sites throughout the Central Business District. The home of Franklin and his wife Honora was located in Grand Circus Park on the site of the now vacant Statler Hotel. The house was directly across the park from the Central Methodist Church, an impressive Gothic structure built in 1867 that graces the intersection of Woodward Avenue and Grand Circus Park. The Statler Hotel acquired the Jerome property around 1910 in order to meet a city ordinance requiring an establishment with a bar to be located a prescribed distance from a church. The offices of the company itself were located in the now demolished Majestic Building that once stood at Woodward and Michigan avenues.

Grand Circus Park is the epicenter for the revolution that changed Detroit and the world. In 1892, Henry Ford built the first Ford Motor car in a small, one-story brick structure that once stood on the site of the park's Michigan Theater. By the 1920s, Detroit was well on its way to becoming the Motor City, the industrial bastion of a new industry that sparked unimaginable growth.

As the city grew rapidly, the mayor of Detroit enlisted the skills of George Jerome, the current George G. Jerome's grandfather, to combat graft in the now sizeable city engineering department. George Jerome turned the reins of the firm over to his son, Gilbert T. Jerome, on the day Gilbert graduated from college in 1924, allowing the elder Jerome to devote his energies to cleaning up corruption. George's efforts were successful, earning him a large silver-plated trophy to honor his achievement.

The first George Jerome also founded Michigan's Board of Registration for Professional Engineers. "He was the first chairman of the state board of registration," said George G. Jerome. "His registration number was two, because they gave the number one designation to a retired University of Michigan professor."

Surviving the Great Depression In 1928, the firm moved its offices to the First National Building where it remained until 1978. The family had created a thriving enterprise over the course of its first hundred years, spanning from 1828 to 1928. In the 1930s, the resilient company weathered the Great Depression with its characteristic ingenuity and business acumen. The firm developed a certificate of survey, the forerunner of the mortgage survey, to assist banks in assessing the boundaries and characteristics of recently foreclosed properties.

"My father began talking to the banks and attorneys and finding out that during all of these foreclosures, the banks didn't really know what they were foreclosing on," said George G. Jerome. "... I think it helped us in the latter part of the Great Depression when things got really rough."

The firm continued to diversify and grow throughout the succeeding decades, engaging in sizeable projects that shaped the region. George Jerome & Co. performed all the soundings and established alignment control for the construction of the Detroit-Windsor Tunnel. "We had to vertically align the shafts ... and we ended up aligning the entire tunnel," said Jerome.

Given the need for deep pilings in downtown Detroit's clay soil, the firm supplied foundation layout surveys and control of foundation elevations for the City-County Building, the Renaissance Center and Ford Auditorium. "The deep pilings have to be entirely vertical when they pour concrete," said Jerome. "The steel has to line up vertically also."

The firm has also worked on other well-known structures marking Detroit's skyline, including the Federal Post Office, the National Bank Building, the Michigan Consolidated Gas Company Building, the Greyhound Bus Terminal, and the Detroit Bank and Trust Building. The firm set the controls for both the horizontal and vertical erection of steel on several of these structures, according to a George Jerome & Co. brochure.

In the late 1970s, the firm performed the survey work necessary for assembling parcels for the development of Harbortown east of the downtown area. "We then started performing the engineering design for the sewers, water main, paving and the layout of the condominiums," said Jerome.

Beyond buildings, George Jerome & Co. has designed and engineered the infrastructure that makes a region work. The firm has assisted in the development of water supply systems for over 170 years, beginning with installation of hollow logs to the design, engineering, supervision and inspection of the storm and sanitary drainage system for Grosse Pointe Woods, Harper Woods and St. Clair Shores. The Milk River, Black Marsh and Girard storm and sanitary drains are aptly named after the original natural features of these three communities. According to the company brochure, Milk River and Black Marsh were nineteenth-century names for a marshland a half-day's ride by horseback from Fort Detroit.

In addition to water supply development, George Jerome & Co. also designed several highway interchanges and bridges for the Michigan Highway Department in the 1950s and 1960s, assisting the massive effort to build our state's extensive network of freeways. The firm helped to form a consortium of relatively small engineering firms who assembled their resources to obtain and execute state highway contracts.

The firm has performed precision surveying work for Great Lakes Steel for the past thirty to forty years. Renovation work at the industrial giant requires "rebuilding facilities to very, very precise tolerances," said George, Sr. "They work under tolerances that are much closer than normal surveying tolerances that are a hundredths of a foot. We use optical tool equipment, which is much more precise than conventional surveying equipment, and we get down to a thousandths of an inch."

Using a select crew with specialized training, George Jerome & Co. is one of the few firms able to perform this type of work. "There is probably not another company that does this in the next two or three states," said George, Jr.

In recent decades, the company has expanded toward the metropolitan area's suburban fringe. In 1978, the firm opened a new office in Roseville and began performing surveying and civil engineering work for burgeoning subdivisions, primarily in Macomb County.

Reflecting the changing face of the region, the firm has survived for six generations as the area has grown from a small strip of ribbon farms on the Detroit River to a large metropolitan area. According to George, Sr., surviving for six generations requires the older generation to inspire the younger with the drive and passion for the company's work. In turn, the younger generation must commit to a rigorous education, studying to become both a graduate engineer and graduate land surveyor, then passing the difficult state boards in both professions to earn a license. "None of those steps are easy," said George, Sr. who assumed control of the firm in 1968. "I took the first exam for registration and only 11 percent passed."

Both junior and senior began working for the company near the age of fifteen, laboring on the field survey crew and then learning business management. "My first project was a survey project in Grosse Pointe," recalled George, Sr. "I had to hack my way through bramble bushes."

As for the company's future direction, "we probably will maintain a very diverse clientele, including municipalities, large corporations and law firms," said George, Sr. "The more full service we are the less we are hit by downturns in any particular section," added George, Jr. The thriving firm conducts surveys and performs engineering for the construction industry; the company's work includes transfer of sales, mortgage surveys for residential housing sales, and the transfer of company properties. The firm also continues to survey properties in Detroit. "We did some survey work for a building near Fishbones that may have been for the Greektown casino," said George, Jr.

The Jerome family definitely has left its mark on the Great Lakes State. David Howell Jerome even became the first Michigan governor to have been born in the state, serving from 1881 to 1882 as the eighteenth governor. Originally, the Jerome clan traces their ancestry to the Lorrain region of France, said George, Sr. The family migrated to England in 1608, living in the island nation until Timothy Jerome set sail for America and settled in Walingford, Connecticut in 1709. By 1827, the Jerome clan was already a fourth-generation American family whose predecessors had fought in the Revolutionary War; one maternal relative was even related to George Washington through marriage.

Perhaps, in the year 2028, this enterprising family and long-lived company may even celebrate its bicentennial year in business. 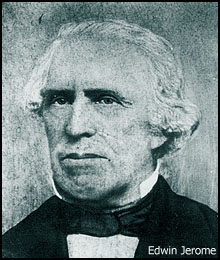 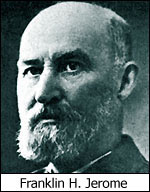 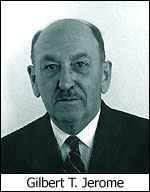 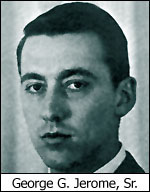 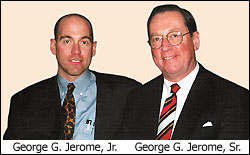